On December 7th, Ipsen’s affiliate in Algeria and its Algerian partner Isly Holding, signed an agreement for the creation of a mixed Algerian-French company. This will be in accordance with the Rule 49/51 governing foreign investment in Algeria.

This took place during the meeting of the Algerian-French high-level intergovernmental Committee (CIHN), at the Hotel de Matignon in Paris, in the presence of the Algerian and French Prime Ministers, Ahmed Ouyahia and Edouard Philippe, respectively.

By becoming an important industrial player in Algeria, Ipsen strengthens its presence and contributes to the development of the pharmaceutical industry in this country.

Under this agreement, a specialized oncology plant will be built in Algeria for an investment of more than 20 million euros. The construction of the first plant in Africa for the production of sustained-release peptide formulations with specific and complex processes will be of great contribution to the development of the pharmaceutical industry. It will also generate significant economic benefits, as Algeria seeks to diversify its production and the demand for this type of medicine is growing rapidly. 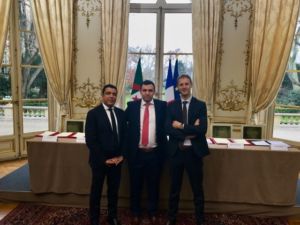 This is a very important milestone for the promising development of our presence in Algeria.

We are delighted to launch this investment program in Algeria for the manufacture of complex drugs to treat serious pathologies answering high-medical needs of Algerian patients.